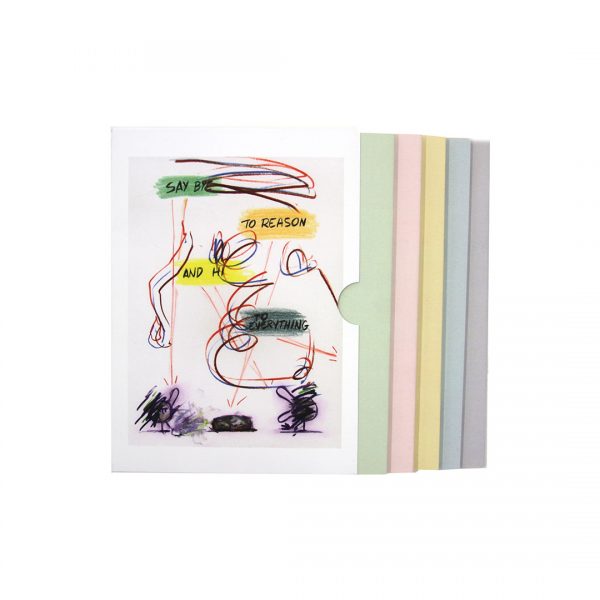 Say Bye to Reason and Hi to Everything

Say Bye to Reason and Hi to Everything is a collection of chapbooks by Dodie Bellamy, Cecilia Corrigan (with illustrations by Jocelyn Spaar), Amy De’Ath, Lynne Tillman, and Jackie Wang. Each chapbook is uniquely designed with an accompanying cover by artist Nayland Blake and features new or previously uncollected works by each writer. The collection is edited by Andrew Durbin.

Dodie Bellamy is an American novelist, nonfiction author, journalist and editor who writes genre-bending works that focus on sexuality, politics, and narrative experimentation, challenging the distinctions between fiction, essay, and poetry. Her methods include radical feminist revisions of canonical works. Bellamy is one of the originators in the New Narrative literary movement of the early and mid 1980s, which attempts to use the tools of experimental fiction and critical theory and apply them to narrative storytelling. Bellamy also directed the San Francisco writing lab, Small Press Traffic.  She teaches creative writing at San Francisco State University and California College of the Arts.

Nayland Blake is a New York-based artist who is currently the chair of the ICP/Bard MFA program. Interracial desire, same-sex love, and racial and sexual bigotry are recurrent themes in Blake’s sculptures, drawings, performances, and videos, which reflect his preoccupation with his own racial and sexual identities. He participated in the 1991 Whitney Biennial and the 1993 Venice Biennale. The Tang Teaching Museum and Art Gallery at Skidmore College, Saratoga Springs, New York, presented a survey of his performance-based work in 2003, and his work was the subject of a 2008 survey exhibition at Location One, New York. Most recently, the Yerba Buena Arts Center in San Francisco presented a one-man exhibition entitled Free!Love!Tool!Box! In 2012, Blake was awarded a Guggenheim fellowship.

Cecilia Corrigan is a writer and performer. She recently starred in the short film Crush, which she co-wrote with director Katherine Bernard, now streaming at Dazed Magazine. She was recently selected as one of Issue Project Room’s Artists in Residence for 2016-17. Her first full-length book, Titanic, won the Plonsker Prize and the chapbook True Beige, (Trafficker Press). She is completing her PhD in Comparative Literature at NYU, writing about social media, makeup, and comedy. Her fiction and essays have been published many places including n+1, Joyland, and Nerve.

Amy De’Ath’s poetry chapbooks include Lower Parallel (Barque 2014), Caribou (Bad Press 2011), and Erec & Enide (Salt 2010). With Fred Wah, she is the editor of a poetics anthology, Toward. Some. Air. (Banff Centre Press 2015). Her criticism has appeared in Women: A Cultural Review, Anguish Language (Archive Books 2015), and Cambridge Literary Review, and is forthcoming in After Objectvism: Reconfiguring 21st-Century Poetry and Poetics (U of Iowa P 2017). She is a PhD Candidate at Simon Fraser University and lives in Vancouver, on unceded Coast Salish Territories.

Lynne Tillman is a novelist, short story writer and critic. Her most recent collection of essaysWhat Would Lynne Tillman Do? was a finalist for the National Book Critics Circle Award in Criticism (2014). Her most recent novel is American Genius, A Comedy (2006), on The Millions’ list of Best Novels So Far in the Millennium. Tillman writes frequently for artists books and catalogues, and has a bimonthly column in Frieze art magazine. In fall 2016, Semiotext(e) will publish hernew collection of fiction, The Complete Madame Realism and Other Stories. She is currently finishing a novel, Men and Apparitions, due to be pubbed in 2017.

Jackie Wang is a writer, poet, musician, and author of Against Innocence (Semiotext(e)), as well as the zines On Being Hard Femme, Memoirs of a Queer Hapa, The Adventures of Loneberry, and The Phallic Titty Manifesto. In her critical essays she writes about queer sexuality, race, gender, the politics of writing, mixed-race identity, prisons and police, the politics of safety and innocence, and revolutionary struggles. Her blog, Ballerinas Dance with Machine Guns, reads like a journal that explores writing as process, the personal as political.