David Chan (b. 1990) is a Brooklyn-based artist who’s practice explores the relationship between photography and installation. He recently graduated with a BFA in Photography from Parsons, the New School for Design.

What does your process in the studio typically look like and how is it informed, encouraged or constricted by the parameters of the space? Do you often reorganize or revise the contents of your workspace or is stability more conducive to your process?

My studio currently doubles as my living space. As someone who works with large prints, materials, and found objects in installations, this can be limiting. But the spatial limitations force me to make very practical decisions when it comes to my work. I’m also forced to utilize every surface available to me. My process is always changing and evolving, so my work space is in a constant state of flux, depending on if I am making pictures or doing material tests for installations. There are also times when I simply read, and the floor is filled with books that I’m working my way through. So, because my approach to making work changes all the time, the work space never stays the same.

What has been your favorite or most productive space to work in as an artist?

Out in the world, making photographs in the landscape. But also, the roof of every apartment I have lived in has become an integral part of my workspace. Its most important purpose is having a space to think, to talk with friends and peers over wine, and to carry out the ritual of watching the sunset. 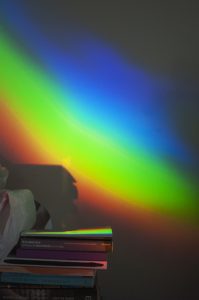 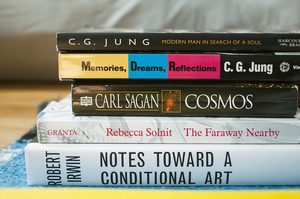 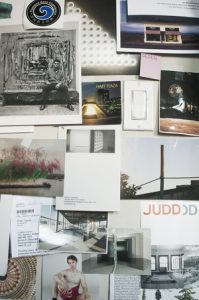 Most of your practice deals with the physicality of light realized through spacial installations, transcending the traditional format of the photograph. Can you tell us a little about how you developed this practice and what initially drew you to it?

For a few years now, I have found myself making pictures of the natural world in the various ways that I encounter it—clouds, sunsets, landscapes, oceans. I followed my impulse to visit the American southwest and photograph the canyons and stars in the desert, to see the 600,000 gallons of water pour over the edge of the falls on the Niagara River every second, and to look for the elusive green ray on the west coast as the sun dipped below the horizon. I suppose these trips were about breaking the monotony of the day-to-day. Searching for these natural phenomena was my way of escaping, to break the habit of the everyday in order to see overall patterns in my life.

I made photographs, but the experiences remained firmly in the past. Back in the city, I found myself far away from the landscapes, horizons, and stars, instead dealing with crowded subway cars and other aspects of daily routine. The daily routine felt like a distraction from the confrontational nature of being itself. To lose a sense of familiarity with the world is to become more aware of the inherent isolation and nothingness that comes with being human. I didn’t want to lose that feeling—the awe and terror I felt as I stood on south rim of the grand canyon.

The pictures I made felt like they had the same function as postcards or other easily obtainable souvenirs. They didn’t fully embody the experience of being there—it was unrealistic to expect that of them. So I started to think about new ways of representing those experiences. I began working with prints in a more installation-based, physical way, often 4 or even 8-feet-long prints that were off the wall, and merging them with machine-made materials or found objects, in order to make something experiential and, in some way, itself a phenomenon. 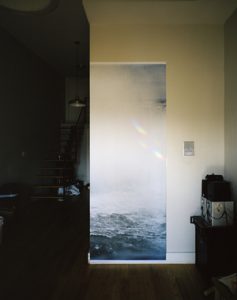 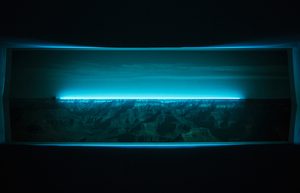 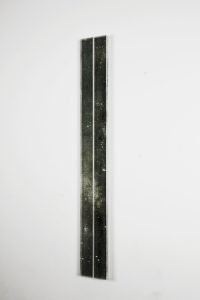 Your personal statement alludes to exploring “the friction between a romantic and scientific experience of the physical world.” These two experiences seem to coexist gracefully in your work, can you tell us a little about achieving a visually representational middle ground or do you find these two experiences to be mutually exclusive?

I found myself really drawn to romantic painters like John Constable, Caspar David Friedrich, or J. M. W. Turner. I enjoyed how romanticism in the 19th century really emphasized an emotional self-awareness, shifting from the objective to the subjective. I grew up in Singapore, an extremely practical and pragmatic society. But I am also a classic Pisces, hopelessly impractical, escapist, and emotional. So my impulse is to rebel against the rational and logical. A person’s emotional experience of the world is undoubtedly mediated by real world, political realities. These two modes of navigating the world are built into me, at a constant friction with each other.

A few months ago, I spent a few weeks photographing sidewalks in New York. I noticed a lot of surfaces on the sidewalk that looked like naturally-formed striations I had seen on mountains upstate. I saw cracks that themselves looked like little grand canyons. There were these interesting man-made marks or accidental flaws that I began seeing on my daily walks to the subway. I would stop and make a picture, completely entranced by the textures on the ground. I was taken out of my routine completely unexpectedly. It was as if the canyons had moved thousands of miles from Arizona to the sidewalk in my neighborhood.

The photo-based installations I was making became a way of bridging the far and the near. For example, I lay a 6-feet-long print over a fluorescent light. The luminescence of the light is alluring, but on closer inspection, the reality of the image breaking down into grain becomes apparent. I hung a 8-feet-tall print of Niagara Falls from the ceiling, in space, using rudimentary objects such as a flashlight and a DVD to project a rainbow on to the print. A phenomenon was made in a simple and crude manner.

What projects, other bodies of work or photo books are you looking at for inspiration? Can you also talk a bit about your recent book project For the Time Being and your collaboration with Troy Wong?

A few months ago, I read A Field Guide to Getting Lost by Rebecca Solnit, an investigation of the art of getting lost, and being comfortable with uncertainty. She writes so beautifully about the longing she felt for horizons and mountain ranges in the far distance, and whether it was possible to cherish the sensation of that longing itself without trying to close the distance.

Also, I recently saw Robert Irwin’s show at the Hirshhorn in DC. Irwin’s work is categorically fluid, from paintings and sculpture to spatial and architectural interventions. It’s clear that for Irwin, the medium isn’t the materials, rather, he is interested in the perceptual experience of the work itself. I think his installation-based practice is brilliant. At times subtle and fleeting, it heightens one’s experience of the physical space it inhabits, providing a new perspective on the space around you that you thought you already knew.

For the Time Being was a project that my colleague, Troy, and I started a couple of years ago, when we were juniors in college. As we approached the end of college, we had many anxieties that we were eager to frame as questions. We were inquisitive and wanted to honor our curiosities. When we would come across someone (usually an artist, curator, educator, or writer) that we felt was interesting, we did everything we could to reach out to them and ask for an interview. We sent emails, attended lectures and openings, and really made full use of the fact that we were students in New York and had access to really anybody. This book became our platform; an excuse for us to sit down with someone and have their attention for 45 minutes to an hour. In a practical sense, this book was an exercise in research, in sending emails, in talking to strangers at openings, and in asking good questions. But the most valuable thing we gained from doing it was just forming genuine human connections with people who were doing work in the world that we truly respected. 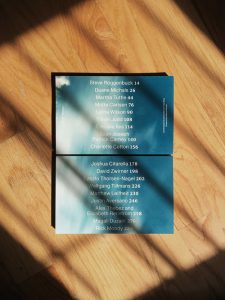 Do you have plans for any upcoming personal or collaborative projects?

At the moment, I am settling in to that strange time of post-graduation. I’m currently looking for work as I continue making work. I’m working with some friends who are producers and musicians to create spatial installations at warehouses and venues at various spaces in the city.

For the Time Being is available at Printed Matter in New York, NY, Spoonbill & Sugartown Booksellers in Brooklyn, NY, 871 Fine Arts Bookstore in San Francisco, CA, and Pegasus Books in Berkeley, CA. It is also available online at http://whatevenis.life/forthetimebeing/buy.

For more of David Chan’s work, please visit his website. 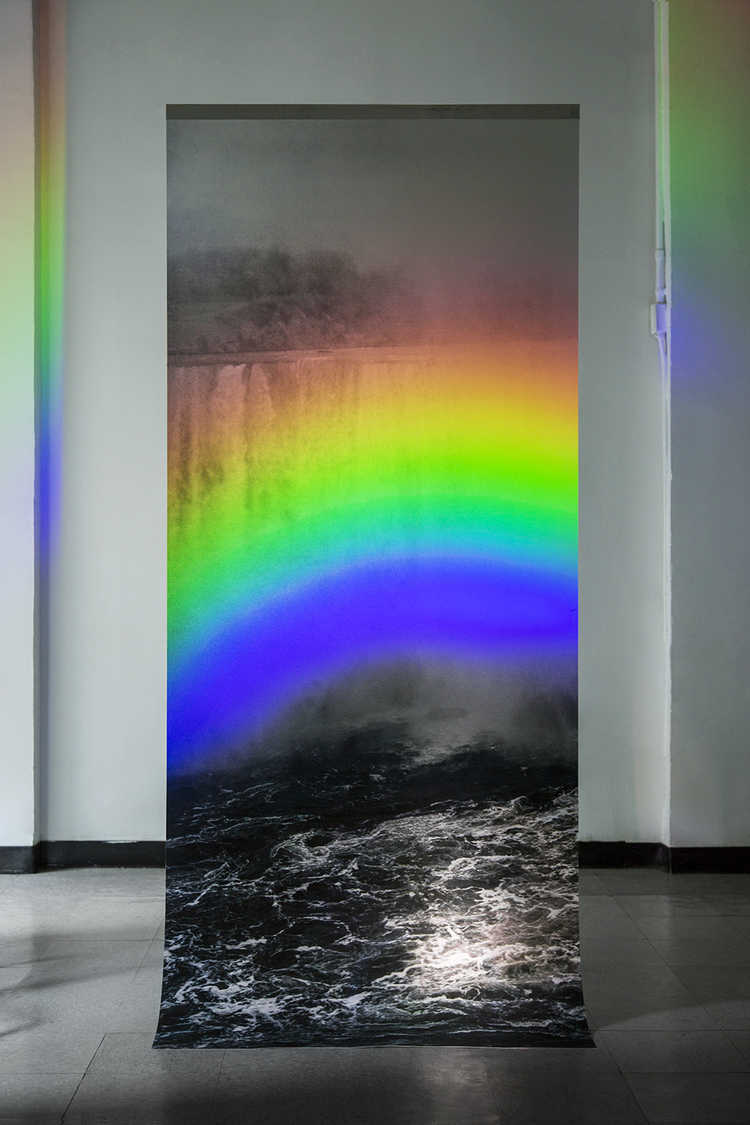